Belgrade, the capital of the Republic of Serbia, is located in South-East Europe, at the beautiful confluence of the Sava and the Danube rivers. Its geographical proximity to prestigious university centers of the neighboring countries (1h 30m flight to Athens and Rome, 1h 10m flight to Vienna and Bucharest, about 400 km to Budapest and Zagreb) as well as affordable cost of living additionally makes it an excellent spot for young people to gain high-quality education while living in a dynamic European metropolis. 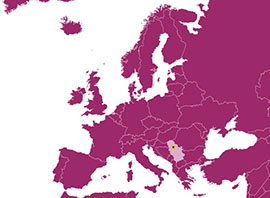 Many cultures and tribes left their mark in its long and turbulent history: Thraco-Dacians, Celts, Romans, Byzantines, Slavs, Ottomans, Austro-Hungarians, have all shaped today’s capital of Serbia into one of the most diverse and interesting cities of South-East Europe. Even one of the first Buddhist temples in Europe was built in Belgrade!

A walk through the city’s center would bring quick shifts of architectural and emotional settings – from a monumental medieval fortress or a 16th century Ottoman mosque, through elegant Habsburg buildings and the Sveti Sava temple – one of the largest Eastern Orthodox Churches in the world, to the Palace of Serbia – the monumental example of the 20th century Yugoslav modernism, or shiny contemporary business buildings. An instant cross-culture and time-travel experience.

With its population of 1,23 million in the urban area, Belgrade is the capital of Serbia and the largest city in the Western Balkans. It is located at the confluence of the Sava and the Danube rivers, at the very border of the Pannonian Plain and the Balkans – the city’s favorite spot for watching stunning sunsets.

Recent years have seen a significant increase in Belgrade’s expat community, ranging from students to business and industry professionals, making much of the city’s content inclusive for English speaking visitors with various cultural backgrounds.

In many ways Belgrade appeals mostly to young people who easily become an integral part of its vibrant pace and atmosphere.

We invite you to make the journey through Belgrade’s unique magic the time of your life and to gain invaluable life and academic experience at the University of Belgrade.