Whether you are only getting into shape or are already a sports wiz, all you need to do is select the activity you enjoy most. There are 16 sports centres, 7 sports halls, 7 stadiums and 6 swimming pools in the city.

Of all those listed, the Belgrade Marathon is the best known and most popular. Belgrade is a frequent host to European and World cups and championships in basketball, handball, water polo and volleyball.

During the Universiade of 2009 Belgrade hosted over 750 accredited journalists and over 8,000 contestants in 15 sports and 203 disciplines. 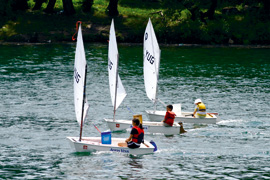 On the river Sava, close to where it flows into the Danube, just 4 km from the city centre lies Ada Ciganlija, at one time an island, now a peninsula. Covered with thick deciduous trees and dotted with clearings and fields, Ada has become the largest, most beautiful and most popular, picnic spot, bathing beach and place to relax in Belgrade.

The Sava Lake is surrounded by more than 7 km of well-kept shingle beaches, whose water is warmer and cleaner than in the river. The lake is ideal for mass recreation, swimming, rowing, kayaking, water polo, diving, wind-surfing and other sports, and a number of international and domestic championships have been held there.

Ada Ciganlija has more than 50 open-air sports fields, including agolf course, and cable-ski circuit. There are football pitches, tennis courts, handball, volleyball and basketball courts, as well as baseball, rugby and hockey pitches. There are also beach volleyball courts and inflatable water soccer pitches, and facilities for the extreme sports of bungee-jumping, wall-climbing and paintball. For anglers there is the Ada Safari Lake, covering 6 hectares, stocked with prize and rare fish of strictly controlled quality.

Ada Ciganlija is a cultural and entertainment centre of Belgrade, especially during the summer. Numerous events are organised with the participation of eminent writers, show-business and theatre stars, folklore ensembles, choirs, orchestras and amateurs from many fields. The catering facilities of Ada comprise dozens of rustic restaurants, floating restaurants and house boats, which by their individual styles preserve and foster the Bohemian tradition of Belgrade. At the entrance there is parking for one thousand vehicles and a marina in the Čukarički rukavac, ideal for mooring of launches, yachts and smaller boats. For visitors to Ada Ciganlija there are shops, picnic sites, a bowling alley, mini-golf, horse-drawn carriages, a tourist train, pedal-boats and beach canoes for sailing on the lake as well as an electrically-powered eco-friendly boat. 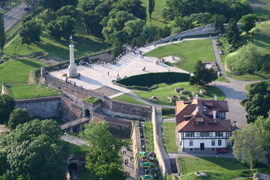 The Belgrade Fortress is a museum of the history of Belgrade, a place where you can literally observe the passage of time.

The Belgrade Fortress changed and developed throughout the centuries, it saw many armies, was the field of many battles, it witnessed the brutality of the conquerors and the courage of the tireless defenders of the city. It was the place where Belgrade started to develop.

The Fortress was built in stages, during the lengthy period between the 1st and 18th century, from a Roman castrum, through a Byzantine castle and the remains of the medieval capital of the Serb Despotate, all the way to an Austrian-Ottoman artillery fortification. The complex consists of the fortress itself, divided into the Upper Town (Despot's Gate, Sahat kula - Clock Tower, Roman Well, Statue of the Victor), Lower Town (Nebojša Tower, Amam – Turkish bath, Gate of Charles VI) and the Kalemegdan Park, home to busts of important persons from Serbian history, science and culture.

The Belgrade Fortress offers an exciting view of the confluence of Sava and Danube, of New Belgrade and Zemun. The Kalemegdan Park contains the "Cvijeta Zuzorić" Pavilion, the Grand Stairway, the zoo, children's park and a number of monuments and sculptures, several sports courts, a museum, a café and a restaurant. 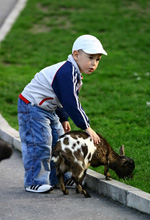 Located in the heart of the city, the Belgrade Zoo, also known as the Garden of Hope, is located in one of the most attractive locations in the city – Kalemegdan Park.

Founded in 1936, it is one of the oldest animal collections in Europe. It was bombed twice during World War II, first in 1941 by the Nazis, then by the allies in 1944. Nearly all the animals were killed during the bombings, while some escaped their cages and roamed free around town. The contemporary zoo spans a surface area of 6 hectares, with over 2,000 animals from 200 species. On the occasion of its 60th birthday it was presented with a monument to its once most interesting and beloved of residents and the first chimp to arrive at the zoo, the ape Sammy. The Belgrade Zoo is open 365 days per year. The cashiers are open between 8 and 16:30 h in winter, and 8 to 20 h in the summer. 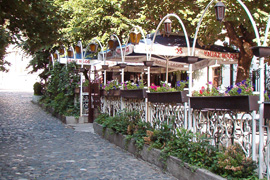 The old, bohemian quarter of Belgrade, Skadarlija, arose during the late 19th and early 20th century when its inns were the gathering place of the best known names in Belgrade. It is frequently compared to the Montmartre of Paris, both in appearance as well as the exuberant and dynamic artistic atmosphere.

This part of the city arose during the early 19th century, with Skadarska Street being named and the houses being numbered in 1872. Skadarlija was once home to many famous writers, actors, painters and journalists. The bohemian spirit of Skadarlija started to develop in 1901 when, following the demolition of the famous "Dardaneli" inn, its residents moved to the inns of Skadarlija. Many famous local and international names "spent their best days there – during the night".

The fraternization of the Belgrade Skadarlija and the Parisian Montmartre occurred on October 22, 1977, at the initiative of the city of Paris. A caravan arrived from France on that occasion, carrying a poet, two painters, representatives of the administration of the Free Commune of Montmartre, fifteen musicians from the parade orchestra and several members of the Society of Beer-drinkers, Second-level Knights of Barley. A large procession of Belgraders, along with the guests, paraded in honour of this event from the Monument of Gratitude to France, across the Republic Square to Skadarska Street, where a memorial plaque was placed. Six months later Skadarlija returned the visit to its fraternal commune, and the artists of Skadarlija performed their programs on the most important places in Montmartre. 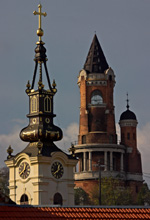 Once a separate town, Zemun has been a municipality within the city of Belgrade since 1945. People have settled the area of Zemun as far back as the Neolithic, using the favourable position of the banks of the Danube and the Sava.

The toponym Zemun arose with the arrival of the Slavs, based on the dugouts ("zemunice") the first settlers lived in. The history of Zemun as a town in the contemporary sense of the word originates in 1717 with the arrival of the Austrians and its joining the Habsburg Monarchy. It became a significant fortification against Turkey and developed as an economic and trading centre located at the border. This improved the position of Zemun as a cultural nexus with special impact for the Serbs still living under Turkish rule at the time.

Zemun had a population of 17,000 in 1910. Most were farmers, but a quarter of the population was employed in crafts and industry. Zemun had more than 30,000 citizens around 1920, with varied national composition. Just under half were Serbs, nearly a third Germans and a fifth were Croatians.

The Zemun Fortress is the oldest building in Zemun, mentioned as early as the 9th century. The current remains are from the 15th century. The Millenium Tower stands at the centre of the fortification. It was erected by the Hungarian authorities in 1896 and was renewed in 1962. It is also known as the tower of Sibinjanin Janko (John Hunyadi).

The sundial house in Dubrovačka Street 2 was constructed during the early 19th century in a classical style with elements of baroque. The renowned Serbian writer and public official Jovan Subotić spent the last days of his life there.

The house of the Karamata family in Matije Gupca Streeet 17 was built in 1764 for the wealthy merchant Kuzman Jovanović, only to be purchased by Dimitrije Karamata in 1772. His descendants still live there. The house interior with its household, period furniture from the 18th and 19th century and family portraits, stands preserved to this day.

Ičko's house, at the corner of Bežanijska and Svetosavska Street, was erected in 1793 in a transitional style between baroque and classicism. It was home to the famous merchant and diplomat of Insurgent Serbia Petar Ičko.

Spirta's house, in Main Street 9, is a rare example of a residential building from the second half of the 19th century, designed by a Viennese architect in a neogothic style. The house was built for the Aromanian family Spirta. It currently houses the Memorial Museum of Zemun, founded in 1955. 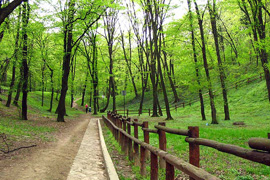 The forest-park and picnic grounds of Košutnjak extend over a surface of 330 hectares, at an altitude of 250 m above sea level.

The forest of deciduous and evergreen trees is crisscrossed by numerous footpaths. Košutnjak was likely named after does ("košuta"), once present in the forest. The thick forest was a closed palace hunting ground until 1903, when it was opened to the public.

Košutnjak contains two specially arranged complexes: the sports and recreation centre "Pioneer City" and the Film City with a complex of ateliers and other facilities and devices for film production. The Košutnjak Sports Centre contains courts for football, athletic competitions, volleyball, basketball, handball, five open and one closed swimming pool. Both summer and winter ski slopes operate on Košutnjak for winter sports enthusiasts. The Hajdučka česma drinking fountain is located at the foot of the hill, where the hunting grounds of the Obrenović family once stood. The "Košutnjak" Camp, "Trim" Hotel and the restaurants "Košuta", "Golf", "Devetka", "Filmski grad" and "Panorama" are also located on Košutnjak. 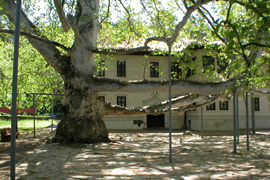 One of the oldest parks in Belgrade, Topčider, is located in the valley of the Topčider River.

The name Topčider stems from the Turkish word topči – cannoneer and the Persian word der – valley. An artillery camp once stood there where the Turks cast cannons to attack Belgrade in 1521, during the siege of Belgrade. Later it became the favourite picnic ground of the pashas of Belgrade. The residence of Prince Miloš Obrenović was built there during his reign, as the chief building of the residential complex. Accessways were built in parallel with the construction of the residence, along with the planting of trees and the decoration of the palace complex environs. The first park in Belgrade arose from the reeds and sedges.

The tale of the planting of the famous sycamore before the Residence survives to this day. The Frenchman managing the work of arranging the park asked Prince Miloš what to do with the single remaining sycamore seedling. The prince ordered the seedling to be put in the nearby lime pit and buried. Thus did one of the oldest and most beautiful sycamores in Europe grow, protected as a natural treasure, over 170 years old.

The function of Topčider Park changed in time. Built as a palace park for the ruler, it became open to the general population in 1903. Topčider was mostly accessed by fiacres, while the introduction of the electric tram, the popular "topčiderac" departing for Topčider from Terazije turned this natural complex into the most popular picnic ground of the citizens of Belgrade.

The park in front of the Residence contains three monuments. The Obelisk, set up in 1859 in honour of the second reign of Prince Miloš, is the work of the stonemason Franc Loran and is one of the few preserved monuments from mid-19th century. The "Žetelica" ("Harvester") sculpture was set up in 1852 and is the sole preserved and oldest remaining example of decorative park sculpture from 19th century Belgrade. It represents the goddess of agriculture Ceres and is the work of the Viennese sculptor Fidelis Kimmel. The monument to Archibald Reiss was erected in 1931 in gratitude to Archibald Reiss, the Swiss criminologist, publicist and honorary captain of the Serbian army. It is the work of Marko Brežanin and it was set up in the immediate vicinity of Reiss' house (Vojvode Mišića Boulevard 73), two years after his death.

For additional information about Belgrade visit website of Tourist Organization of Belgrade: www.tob.rs.