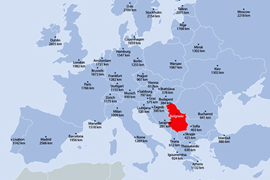 Belgrade is located in South-eastern Europe, on the Balkan Peninsula, at the crossroads of Eastern and Western Europe.

The city lies upon the Danube River, the aquatic route connecting the countries of Western and Middle Europe to the countries of the South-eastern and Eastern Europe. Its harbour is visited by ships from the Black Sea, and with the deployment of the Rhine-Main-Danube channel it found itself at the centre of the most important aquatic route in Europe: Northern Sea – Atlantic – Black Sea. Due to its position it was rightfully named "Gates of the Balkans" and the "Doors of Middle Europe".

The coordinates of Belgrade are marked in the centre of the city (in Knez Mihailova Street): 44°49'14" of geographic latitude north, 20°27'44" of geographic longitude east and 116.75 m above sea level. 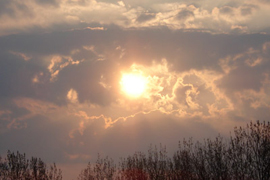 The climate in Belgrade is moderate continental, with four seasons. Autumn lasts longer than spring, with longer sunny and warm periods.

The two weeks of belated summer in October, particularly enjoyed by Belgraders, are called St. Martin's Summer ("miholjsko leto"). The winters are not particularly harsh. There are 21 days on average with temperatures below zero degrees centigrade during the winter. January is the coldest month, with average temperatures of 0.4 °C. Springs are brief and rainy, with summer arriving suddenly. The hottest months are July (21.7 °C) and August (21.3 °C).